Established as a free public library in 1897, the building construction was funded by the generous gift of Charles H. Ludington in honor of his mother-in-law. Originally organized and operated by the Ladies Library Association, their funds were merged with the Phoebe Griffin Noyes Trust to create the present library association.

Subsequent additions were added to the building to meet the developing needs of a growing community. The most recent and ambitious expansion was in 1995, which more than doubled the square footage of the previous building, including a large Children’s Room and Community Room for public use.

Designed to incorporate library automation and Internet access while maintaining quiet and inviting reading areas, the library strives to meet the changing role of the public library for its patrons. 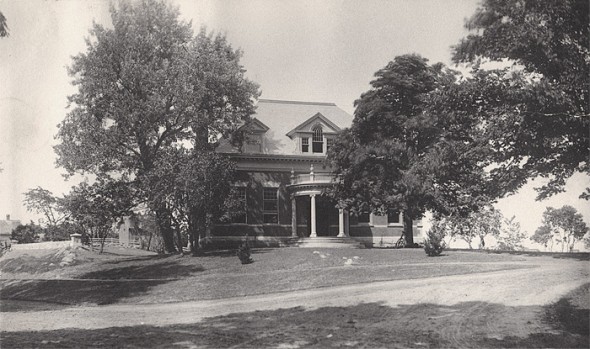 Phoebe Griffin Lord Noyes was born on February 20, 1797 at the Lord homestead on Lyme Street, today the site of the Library which bears her name. She was named for her mother, Phebe Griffin, of East Haddam. Her father, Joseph Lord, was a farmer with a substantial estate. After his death in 1812, Mrs. Lord took over management of the farm and the education of her daughters. She highly valued education, having herself been afforded the unusual opportunity of studying with her brothers as they prepared for the Yale entrance exam. One of these brothers, George Griffin, became a successful New York attorney, and offered to educate young Phoebe alongside his own daughter.

Even as a child, Phoebe had shown considerable artistic talent, painting pictures using the juices of flowers and leaves. While in New York, she immersed herself in her studies, paying particular attention to her French, and studying painting with the highly-regarded miniaturist Madame Vaillant. Phoebe’s cousin William Jewett, then an Associate Member of the National Academy of Design, was also a likely influence on her artistic development. An 1812 letter from George Griffin to Mrs. Lord says, “We are very pleased with Phebe. Her progress in painting is very rapid…”

Whilst in her uncle’s care, Phoebe also had opportunities to refine her social graces. Contemporary accounts refer to her as “very handsome, with light hair, beautiful gray eyes, fair skin, and rosy cheeks… full of fun, fond of society, and (with) a number of admirers.”

When her New York sojourn ended, Phoebe returned to her home in Lyme and embarked upon a teaching career. She married Daniel Noyes in 1827, and in 1831 they purchased the Parsons’ Tavern building and Phoebe resumed teaching a few years later. In addition to providing instruction in the basic subjects, Phoebe also taught her students how to paint and draw. Teaching was considered a noble, appropriate way for a woman to contribute to the family purse, but we also read of “her intense desire to make the most of her life by stimulating and encouraging, intellectually and morally, the many who might thus be brought under her influence.”

“She taught two generations, and her high moral influence, in a constantly widening sphere, during her lifetime and since, cannot be estimated. She had one of the first art schools in this country… To her influence and art teachings are due much of the refinement and elegance of living which have so remarkably distinguished the society of Lyme.”

Phoebe’s unfailing moral compass was tempered by a liveliness and strong sense of fun. The Noyes home was a center of activity and social life for the young people of the town. Phoebe enjoyed dancing and card playing, advocated for the “refining influence” of dancing upon the young, and often joined in a lively Virginia Reel with Daniel at the end of a social evening.

Her granddaughter Katharine Ludington wrote in Lyme-and Our Family, “She loved young people, and loved to have them around her, and was conscious of her power over them. Her many cares never made her dull, and she was always ready, no matter how tired she was, to enter into the spirit of their frolics and amusements.”

In her later years, Phoebe remained a strong and beneficent influence upon the young people of the town. She died on October 12, 1875, and is buried in the Duck River Cemetery, but her truest monument is the Library which was given in her memory. Dedicated in 1898, the Library was the gift of Phoebe’s daughter, Josephine Noyes Ludington and son in law, Charles H. Ludington. To this day, Phoebe’s love of learning and good company is honored at the Library. Her portrait hangs in a place of honor above the fireplace in the Reading Room, and her birthday is celebrated with a party featuring cake, speeches and children’s activities.

—Excerpted from Remarkable Women of Old Lyme, by Michaelle Pearson and Jim Lampos